Between 0.1% to 0.2% of the UK population has been diagnosed with anorexia nervosa, a mental disorder which often results in patients being severely underweight. That means up to 5 people in every 1,000 people in the UK are victims of anorexia. To put that into perspective, for a UK population of 66 million, that is over 300,000 people.

The disorder is a culmination of cognitive, physical, emotional, and behavioural symptoms. These may involve obsessing over weight, not recognising one is underweight, heart palpitations, low blood sugar, skipping meals, and over-exercising. The Diagnostic and Statistical Manual (DSM) of Mental Disorders has three key principles for diagnosing anorexia; the patient must be severely underweight, they must have an intense fear of gaining weight, and they do not recognise how unhealthy they are. 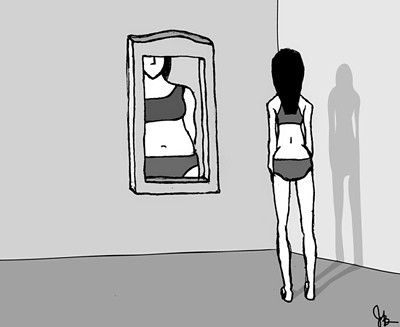 But where does this behaviour come from? Why would someone jeopardise their health and wellbeing by under-eating? It could be argued that anorexia itself is a symptom of the desire to comply to societal norms and beauty standards. On the other hand, maybe the disorder can be correlated with the presence of a certain mutation in the genome. This brings up the classic nature versus nurture debate. Does anorexia have a biological cause or is it more influenced by the external environment?

Many studies have found a biological explanation to the disorder, including one that found a 58% concordance rate (a term in genetics used to explain the presence of the same characteristic in twins) for anorexia in identical twins, compared to only 5% for non-identical twins. While this demonstrates that there may be a genetic component to the disorder, the question remains as to whether there is a specific gene that causes anorexia?

One study, by Bernie Devlin and colleagues, found a link between a gene that encodes serotonin and anorexia development. Serotonin is a neurotransmitter, often referred to as the ‘happy chemical’, and is encoded by the HTR2A gene. Serotonin transmits signals across neurones and has an effect that improves mood and alleviates anxiety. Devlin found that the presence of a HTR2A mutation gave rise to a higher susceptibility to anorexia. This was potentially due to low serotonin levels generally resulting in lower energy and higher rates of depression. This defect may contribute to harmful thoughts that include building a negative body image.

However, many argue that the causes of anorexia are solely external. Many note the rise of modelling as a major contributing factor because the industry promotes an extreme slim figure. Advertisements. Websites. Magazines. All covered in images of models with this supposed ‘perfect’ figure. When there is such a lack of representation for plus sized models, is it really hard to imagine why people tend to see a more thin figure as ‘desirable’?

This thought process can be explained by a psychological learning model known as operant conditioning. This suggests that there are four ways of learning, one of which is positive reinforcement (see figure below). When someone’s action is praised they will associate their action with the reward, which leads to them to continue that action. One study focused on a 13 year old girl with anorexia. In the experiment she was praised for her diet and a 12kg decrease in her weight was observed. She also developed pneumonia due to malnutrition. This operant conditioning reinforced the idea that eating less was positive rather than damaging her health. Although this case study supports the sociocultural explanation of anorexia, there are some limitations the study. Firstly, the girl already had anorexia which means the operant conditioning in the study was not the only cause of her developing her eating disorder. The study is fairly subjective and has a limited sample size so these results can’t be considered representative of most cases. While the demand for plus size models is slowly increasing, there is still stigma surrounding body image within the modelling industry and within society as a whole. However, applying operant conditioning theory could potentially reduce this stigma if plus sized models and body acceptance are promoted. Some studies have found that women exposed to images of a plus sized model showed greater body satisfaction and had less comparative tendencies.

There are many examples that support each aspect of the nature versus nurture debate surrounding anorexia. Personally, I believe that the argument for nurture is stronger. While an individual can have a predisposition to anorexia, they may grow up in an environment where thin figures are not as desirable, which may reduce the chances that they develop the disorder. Furthermore, the research into the biological causes of anorexia is fairly recent and has not produced results as strong as  developed psychological models (like operant conditioning), which explain anorexia’s social cause. Although genetic research is well established, this specific field is fairly new and is constantly being developed. A single or set of genes causing anorexia have yet to be found. Overall, it is difficult to draw conclusions as to the true cause of anorexia. However, in my opinion, because there are more studies that have provided evidence for the nurture side of the debate, and because some of these studies are based in well developed psychological theories, I believe anorexia is mostly explained by external factors. That being said, genetic research is constantly ongoing, thus anorexia-inducing genes may yet be discovered.